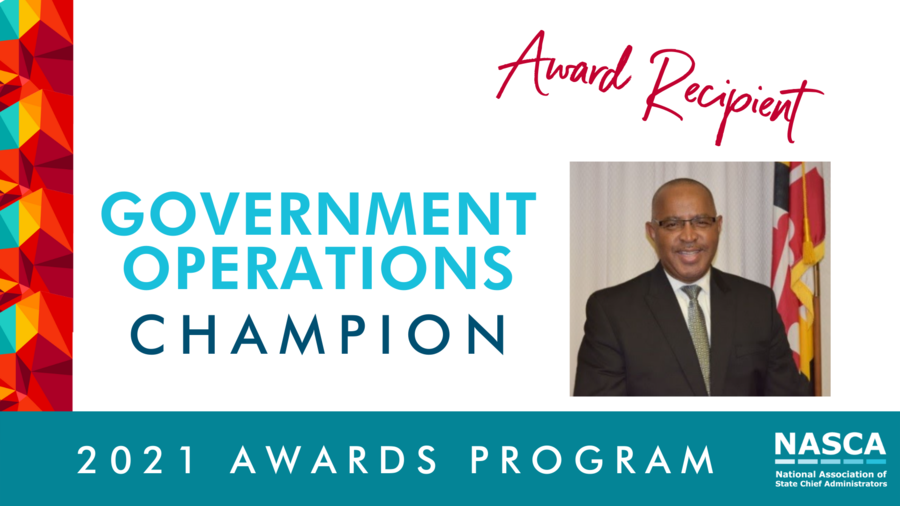 NASCA, an association devoted to state Chief Administrative Officers and their senior leadership, presents the award to honor an individual that champions the critical role of efficient, effective, equitable operations and demonstrates a passion that good government operations and programs will enhance the customer and citizen experience.

Mr. Howard received the honor October 27th during NASCA’s award ceremony at the 2021 Institute of Management and Leadership in Rochester, New York.

“Every day General Services works behind the scenes to facilitate the effective running of our state government, so it is a great day when one of our dedicated and hard-working employees receives a noteworthy public recognition,” said Secretary Ellington E. Churchill, Jr. “Jack is a true role model and an exemplary employee, and our entire General Services team congratulates him on this well deserved honor.”

Since April of 2017, Ulysses “Jack” Howard has served as the Assistant Secretary for Business Enterprise Administration with the Maryland Department of General Services. In this leadership role, he is responsible for managing several programs for the state that have a total value of over $2 billion dollars. Those programs include the State Capital Grants and Loans division, Inventory and Fuel Management Standards, MBE & Small Business Outreach and Training, Marketing, the state’s Federal Surplus Program and the state’s Mailroom Operations. As the head of the State Capital Grants and Loans Program, he oversees over 1,400 active capital grant projects that are valued at over $1 billion dollars per year.

Howard has a long list of accomplishments in Maryland:

• Overhauled the State Capital Loans and Grants Program which provides over $1 billion dollars in grants for state grantees;
• Overhauled the state’s Federal Surplus Program;
• Currently oversees the state’s fuel system contract negotiations;
• Developed mission-critical policies for Inventory Standards for the State of Maryland and Technology Services for the Department of General Services; and
• Spearheaded the effort to coordinate with various state departments to successfully develop a statewide Minority & Small Business Outreach and Training workshop to help businesses understand how to work with the State of Maryland.

Also, while at the Department of General Services, he has improved and processed the disposal of the state’s excess property in a very successful and efficient manner, generating over $3 million dollars in revenue for DGS and the state in auction sales for the past four years from 2017 – 2021.

In 2018, Howard also developed a monthly fee structure for fellow state agencies to pay for daily mail delivery. This has saved DGS tens of thousands of dollars over the past four years because, prior to 2018, DGS was not collecting any fees from other state agencies and was instead covering this expense itself.

“Jack demonstrates both passion and the ability to execute with excellence as is evident with his successful list of accomplishments for the State of Maryland that have driven new efficiencies, streamlined processes and realized cost savings,” said Pam Goins, NASCA’s Executive Director. “Jack definitely epitomizes the essence of this award demonstrating the execution of programs that enhance the customer and citizen experience.”

The Government Operations Champion Award was established to recognize individuals in departments of administration that demonstrate a passion and execute on advancing the industry.

NASCA’s mission is to help state Chief Administrators and their teams strategically transform state government operations through the power of shared knowledge and thought leadership.

Life.io Selected to Participate in Plug and Play’s Insurtech Program